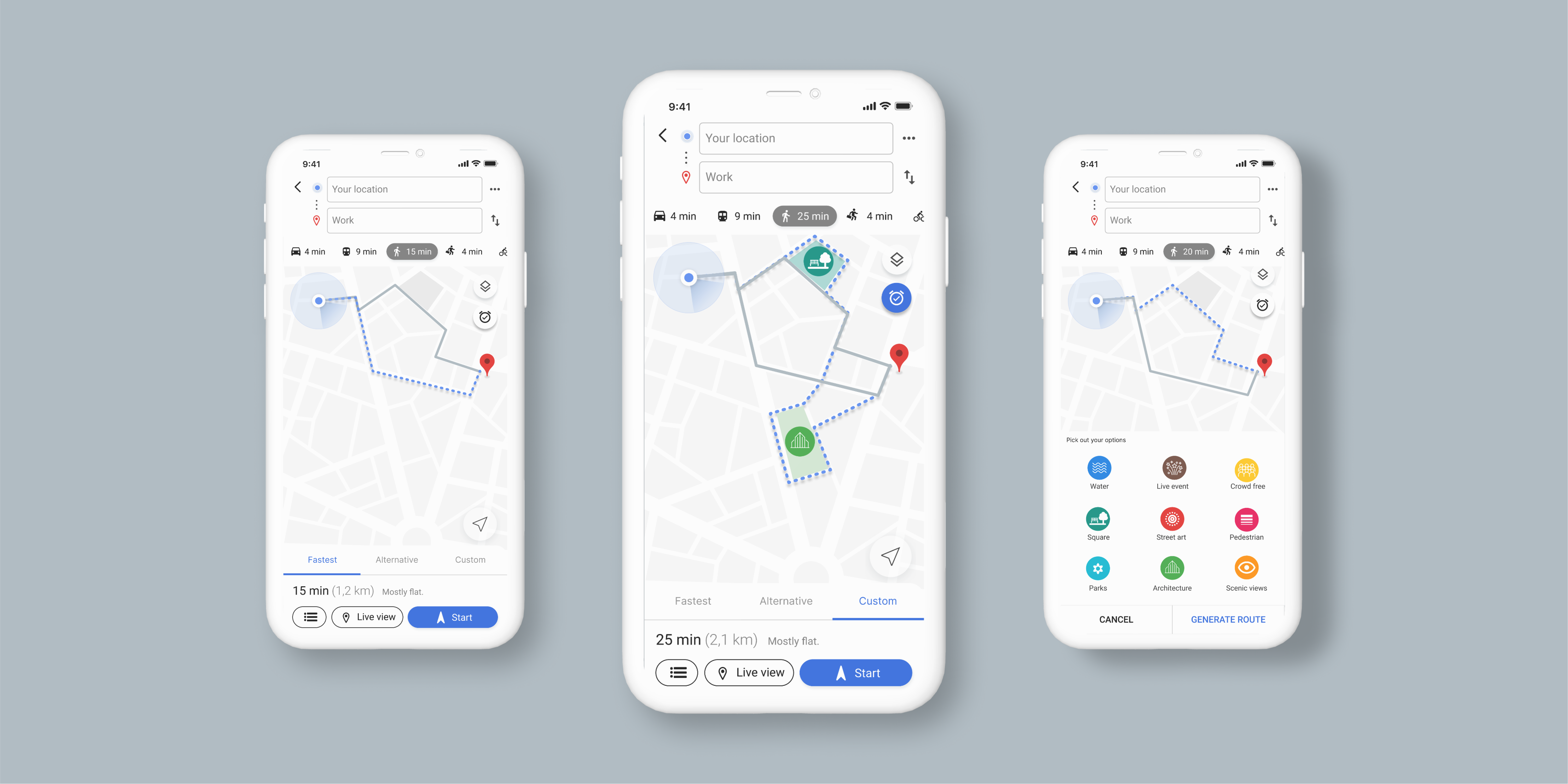 Link to studio websiteLink to publication

Parisian city dwellers love to take walks around the city to discover hidden gems, boost their creativity through street art and live events or connect with nature by taking a stroll in the park or by the Seine. They especially enjoy these moments on the way to work, it helps them clear their mind, brighten their day and bring value to their daily routine. These users need a new Google feature that would allow them to find these alternative routes on her way to work, while making sure they get there on time.

The new Google maps feature allows users to further design their alternative routes based on their preferences and mood. The users would still be able to organize themselves and set a travel duration time. Further down the line, the feature could develop to present users while walking with interesting information and live events in real time. Eventually, the feature could evolve into a more collaborative and social one.

Google maps is unmistakably the web mapping service market leader. The app is used by over 1 billion people worldwide every month ! Secondary research on Google maps and it’s to competitors have helped me further grasp each of their attributes, features, identities, values and brand positioning. Here are some facts about Google maps and notable market competitors:

After reviewing Google’s positioning and investment in its maps, I quickly came to realize that Google has a very powerful tool in its possession. From a quantitative standpoint, by reviewing the number of downloads and ratings on app stores, we can safely assume it’s fulfilling its original mission as a web mapping service.

On the user’s level, features and implementations have been added to enrich the user’s navigation experiences or embrace new mapping technologies.

From the business point of view, Google maps has a way more complex business model than it seems. On the one hand, Google maps makes profit by selling mapping data to businesses and developers. On the other hand, Google strengthens its marketing while collecting user’s data and deploying targeted ads on all its platforms.

At first sight, Google maps has a fairly obvious mapping functionality. From my secondary research, I quickly understood that apart from it’s primary navigation function, It has many different features that make its business or user experience way more complex.

While reviewing the company history, I have come to understand that the product is far from static, and has had innovative features and new technologies added over time.

I have observed that a product such as Google maps is seldom a stand-alone and one-time design but rather the product of endless iterations.

That being said, I felt a little relieved when confronted with the brief that was given to me:

Sometimes, people like to take a stroll in the park or walk around the city and discover beautiful landscapes, but they usually don’t do it before going to work, and that’s a shame. And so, Google maps would like to add a new feature that helps people take the longest and nicest way to work without getting fired.

The feature seemed absurd at first, and the lie generator feature seemed like the only viable solution. I decided to practice patience and trust the design thinking process that would follow.

For the primary research, I recruited three participants and interviewed each of them for 20 minutes. I constructed my interview guide in three steps: app overview and usability, insights and feelings, and desirability.

Secondly, I explained I was working on a new Google maps feature that may sound absurd or crazy. The feature would help them take the longest and nicest way to work without getting fired. I tried to understand their reactions, insights and feelings in regard to the new feature.

Lastly, I concluded with a quick inquiry about the product’s desirability.

From the general app overview questions, I found that all users rely on Google maps while commuting to work. They all responded to using Google maps at least once a day. Even though they would use the app more often when they started a new job, users have expressed still using it because it makes them feel safe or because they like to wander.

Furthermore, I had made the assumption that users were generally short on time in the mornings. I was quite surprised, as all the participants said they were seldom late to work.

Users often take extra time to enjoy a walk to the office in the morning, and some go in earlier to socialize with colleagues before office hours and have no trouble managing their time. When I explained the new feature, users simply suggested that the new feature would take into account their time constraints.

At this point in the interviews, as the users were not very worried about being late or being fired, I shifted my focus on the alternative routes topic. I had come to realize that these morning walks were very important to the users, either to enjoy the trip or as an alternative to a bad commute.

The user interviews had led me to pivot from the original brief, and define a new point-of-view :

Our users, parisian city dwellers, love to take walks around the city to discover hidden gems, boost their creativity through street art and live events or connect with nature by taking a stroll in the park or by the seine.

They especially enjoy these moments on the way to work, it helps them clear their mind, brighten their day and bring value to their daily routine.

These users need a new Google feature that would allow them to find these alternative routes on her way to work, while making sure they get there on time.

For more transparency in case they are late, they would like to be able to share their journey with her teammates and boss.

For the ideation sessions, I teamed up with two other designers. I had finally defined a clear point of view and I was psyched to share it with them.

In the first session, we use the worst idea tool. We each came up with 5 to 10 terrible, hilarious, illegal, silly ideas that would make the users miserable. Then, each of us would review all the ideas silently and each pick out another designer’s worst idea. The three worst ideas, picked because they had potential, were then turned into the best ideas.

In the second session, we had the three previous best ideas to work with. Each of us ideated using the crazy eight tool, and as a result we came up with 24 potential ideas.

By the end of our ideation sessions, I chose the most valuable ideas to ship for the development of the first stage of the new Google maps feature. The feature would allow users to further design their alternative routes based on their preferences and mood. The users would still be able to organize themselves and set a travel duration time.

I also identified a potential second stage the feature could develop into. The feature would present interesting information or live events in real time to users while walking. Furthermore, the feature would evolve into a more collaborative and social one.

Once the feature had been defined, I created a user flow of the feature to visualize the tasks and interactions the user would have with the new feature. I depicted both the first stage and second stage of the new feature. The first stage starts with the user entering a destination on google maps, and ends when the user starts walking. The second stage starts with when the user starts walking, and ends when the user arrives at their destination. The user flow describes the happy path where everything goes well.

Link to the prototype

Once I had designed the mid-fi prototype, it was ready to be tested. I developed a testing scenario which specifics tasks. I recruited 4 participants and tested each of them for 30 minutes. During the first round of testing, the participants completed the tasks while I watched, listened and took notes. During the second round of testing, I was able to inquire about the participants’ perceptions and interactions with the prototype.

2- enter or type the work destination

After the usability testing, I collected information that would highlight problems and allow me to improve the prototype’s usability and users’ interactions.

While debriefing with the participants, I was able to gather some insights and feelings related to the new feature:

The qualitative and quantitative data I was able to gather in the usability testing, along with Google’s UI style tile, led me to design a hi-fi prototype.

Link to the prototype

The first step after implementing the product would be to collect usability data. If the feature turned out to be successful, I would iterate to further develop the second stage and complete the user flow. I would prototype the custom feature, the reminder feature and the collaborative feature.

To measure success and failure metrics, we would need to verify if the users integrate the feature in their morning routines. Reviews, app downloads and user data would allow further testing and iterations.

Until then, happy mapping ! 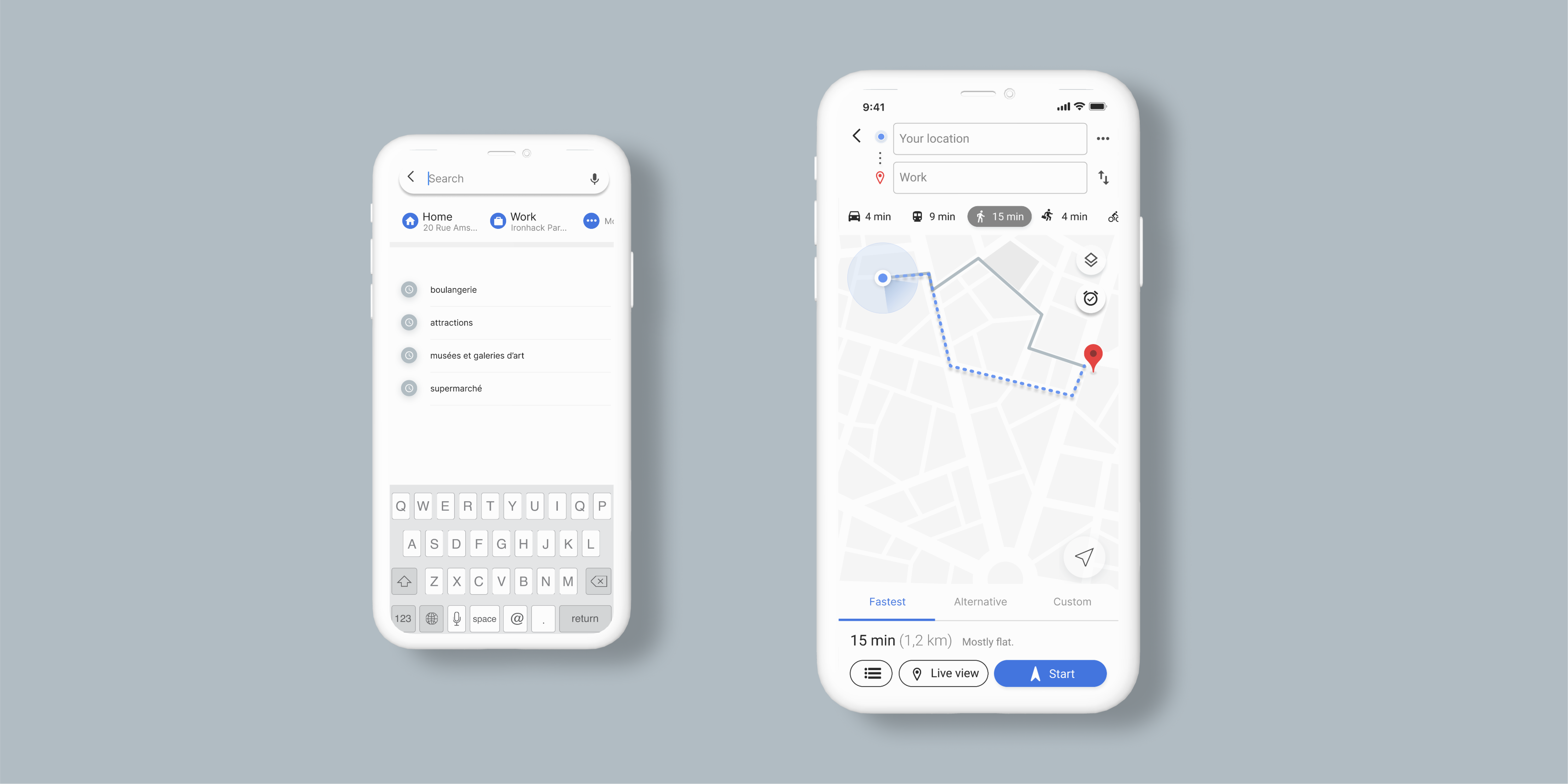 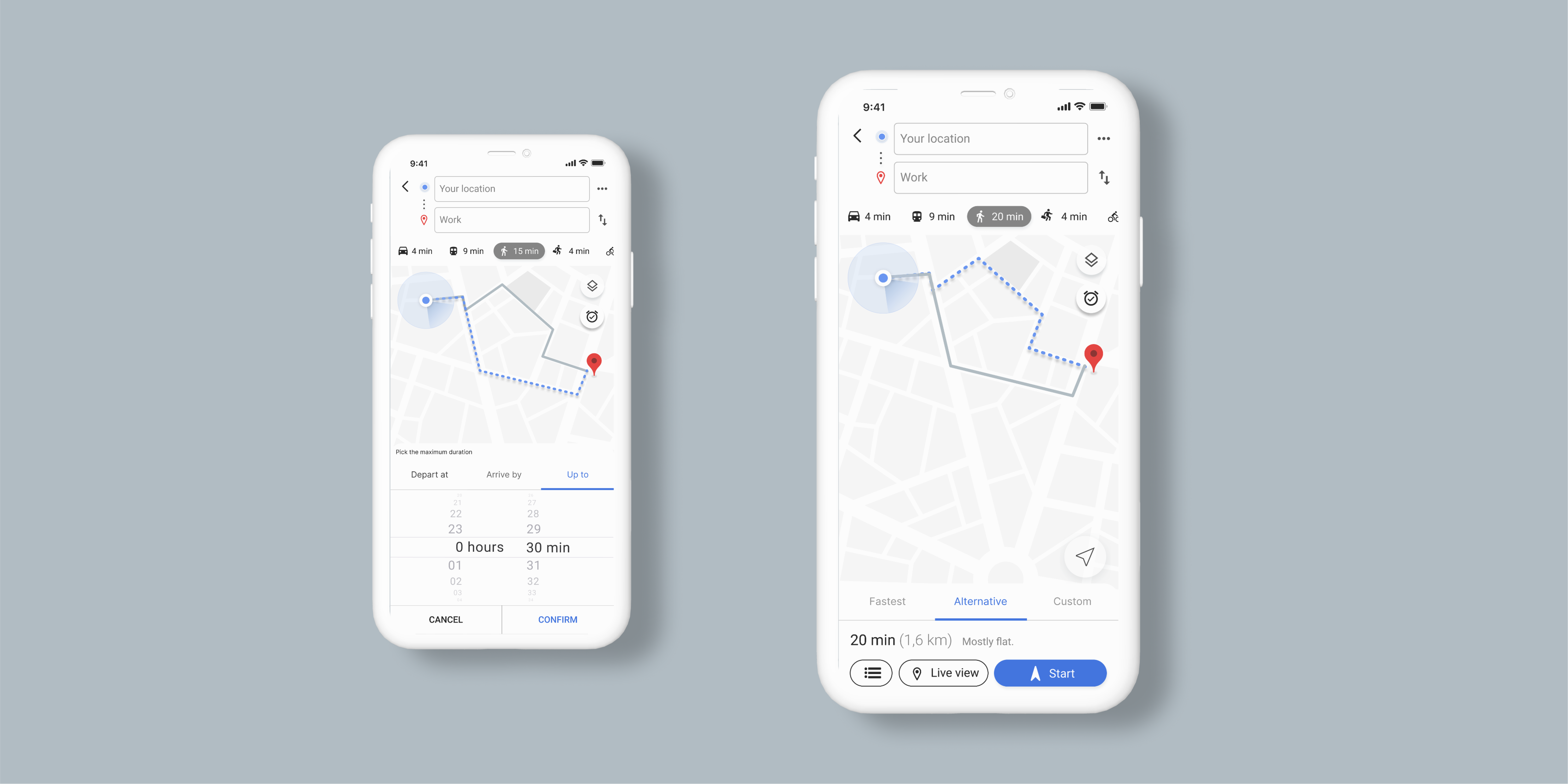 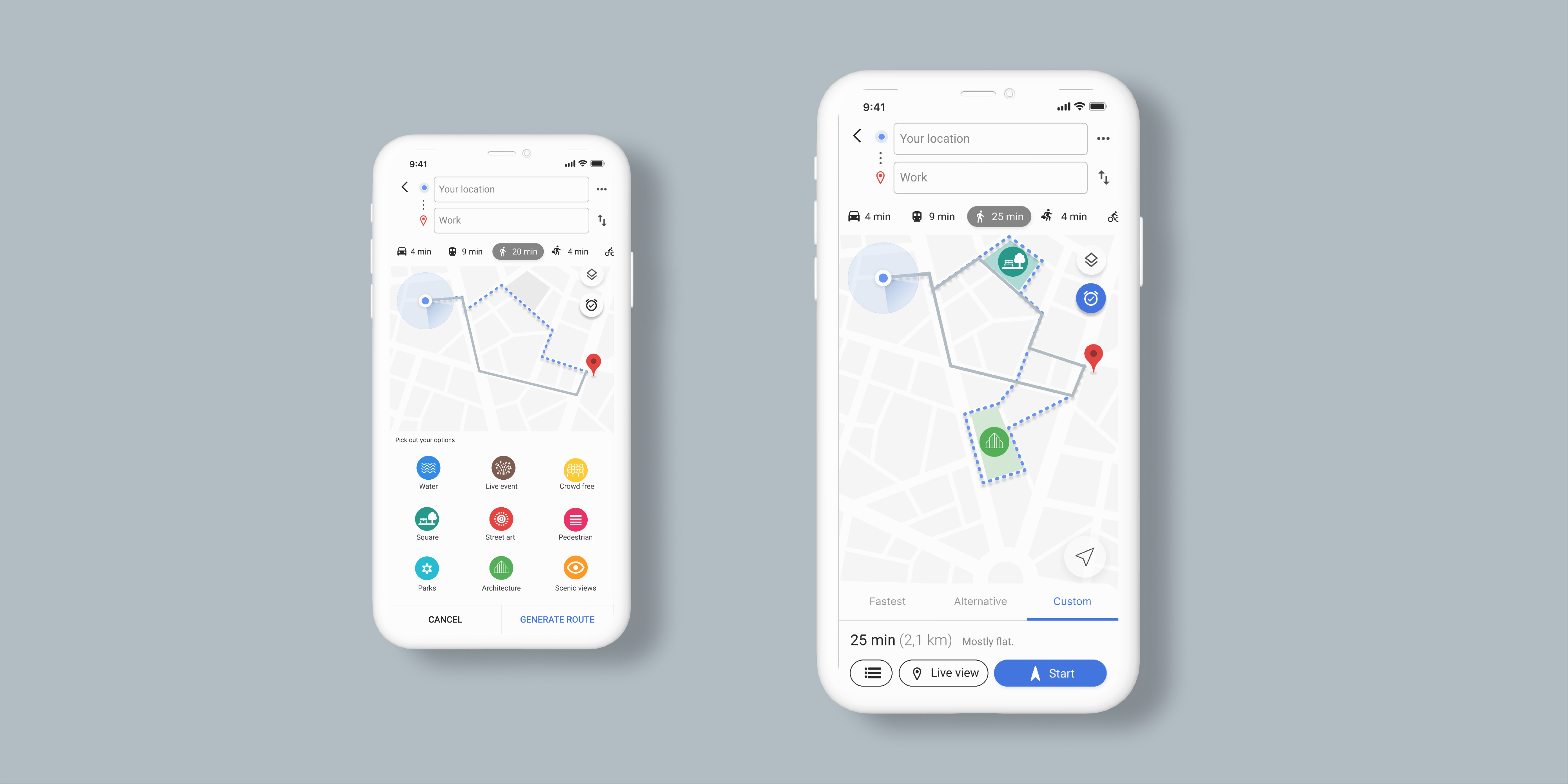 "If the commute is going to be horrible, I would rather take the extra 5 minutes." 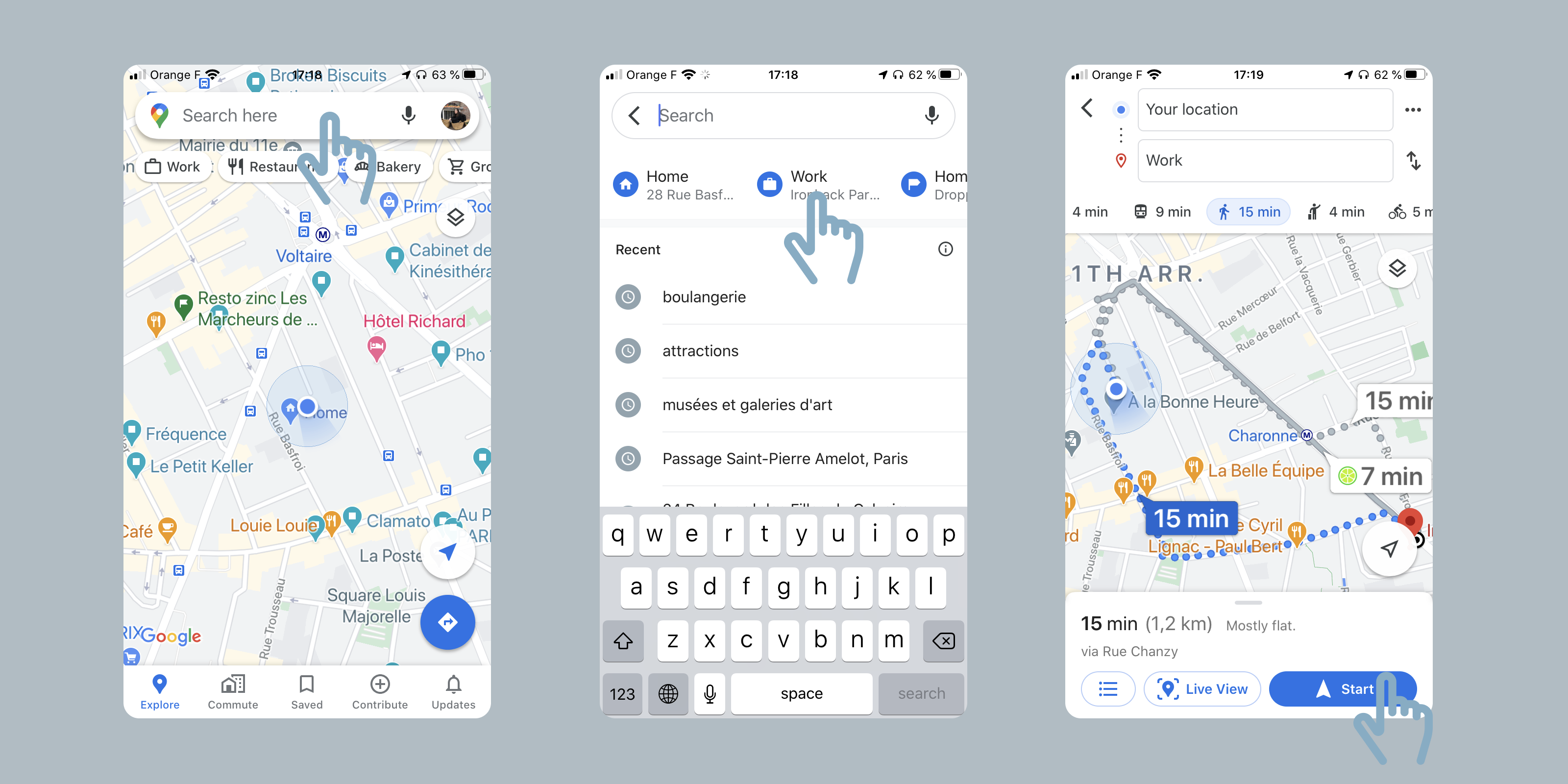 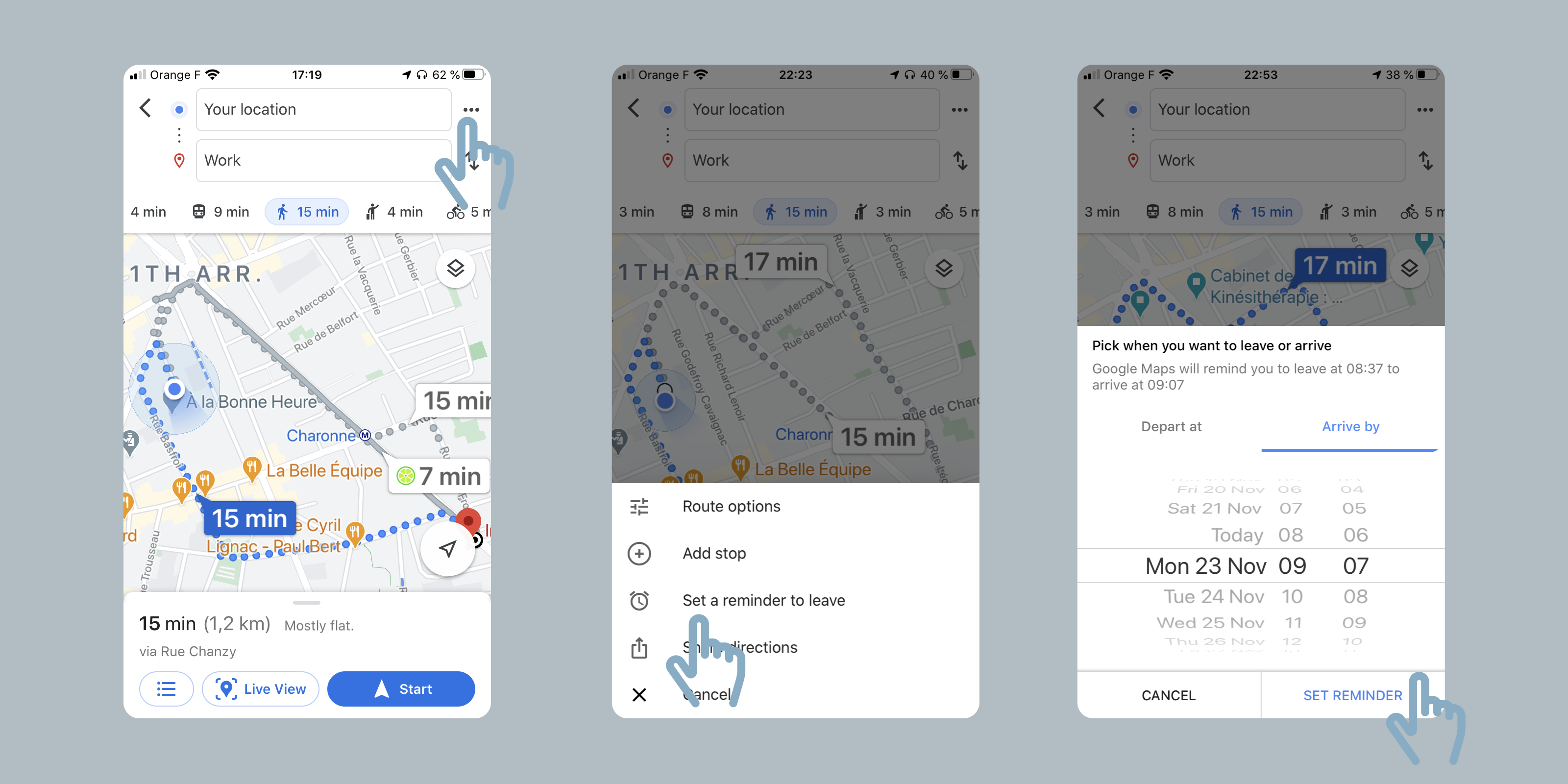 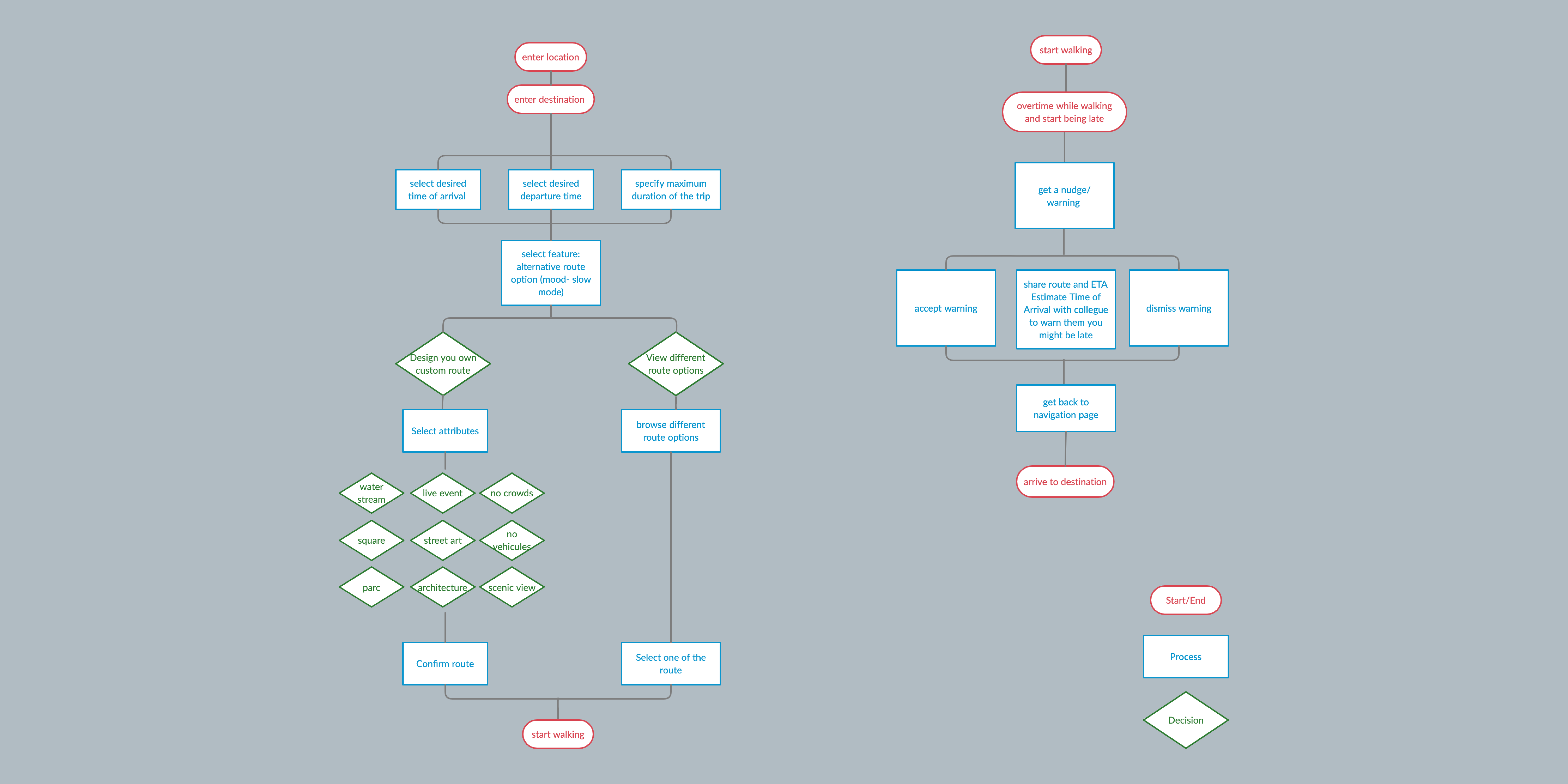 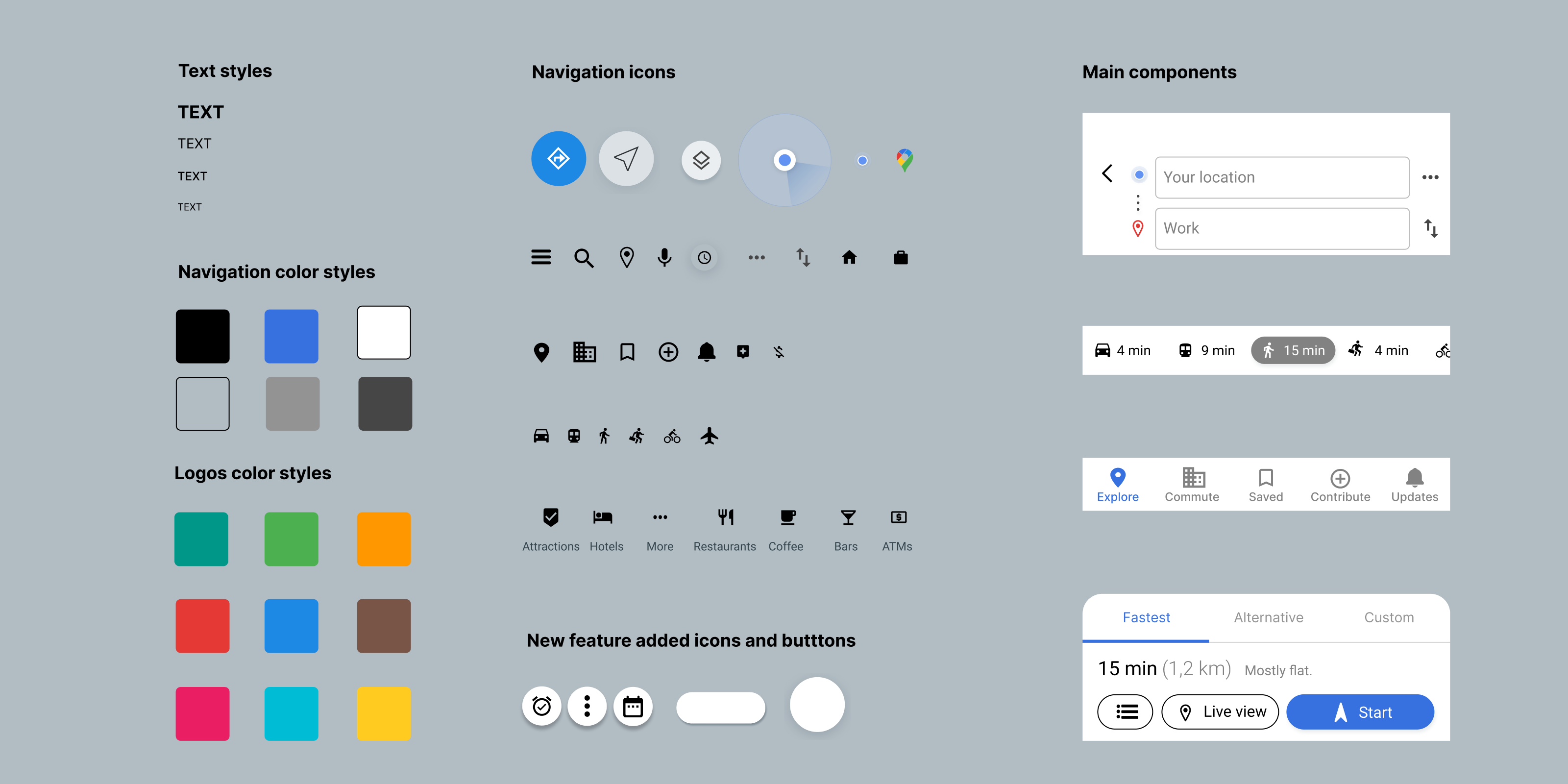 "It’s obvious for me to want to enjoy my route, the same way i enjoy a meal." 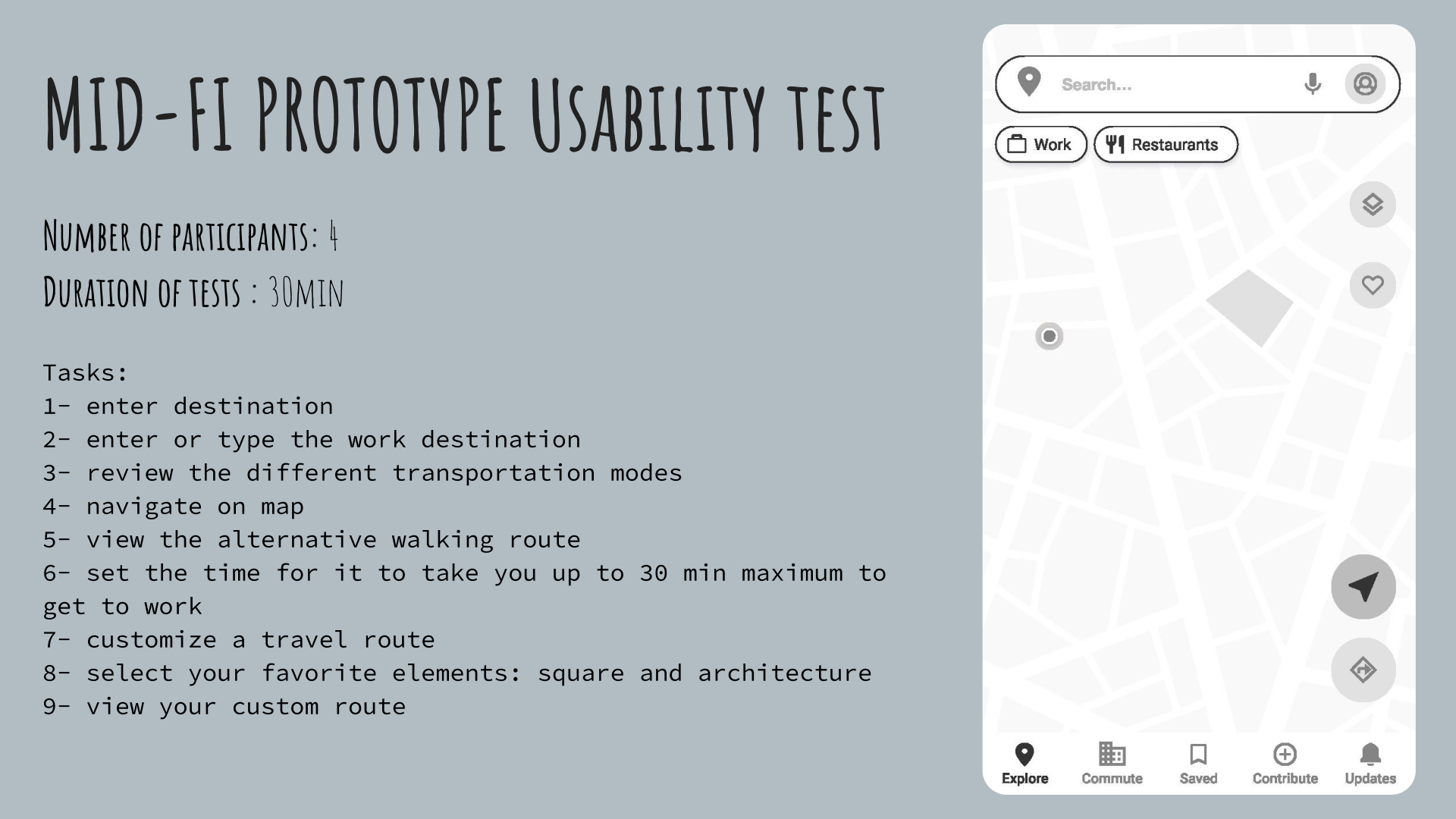 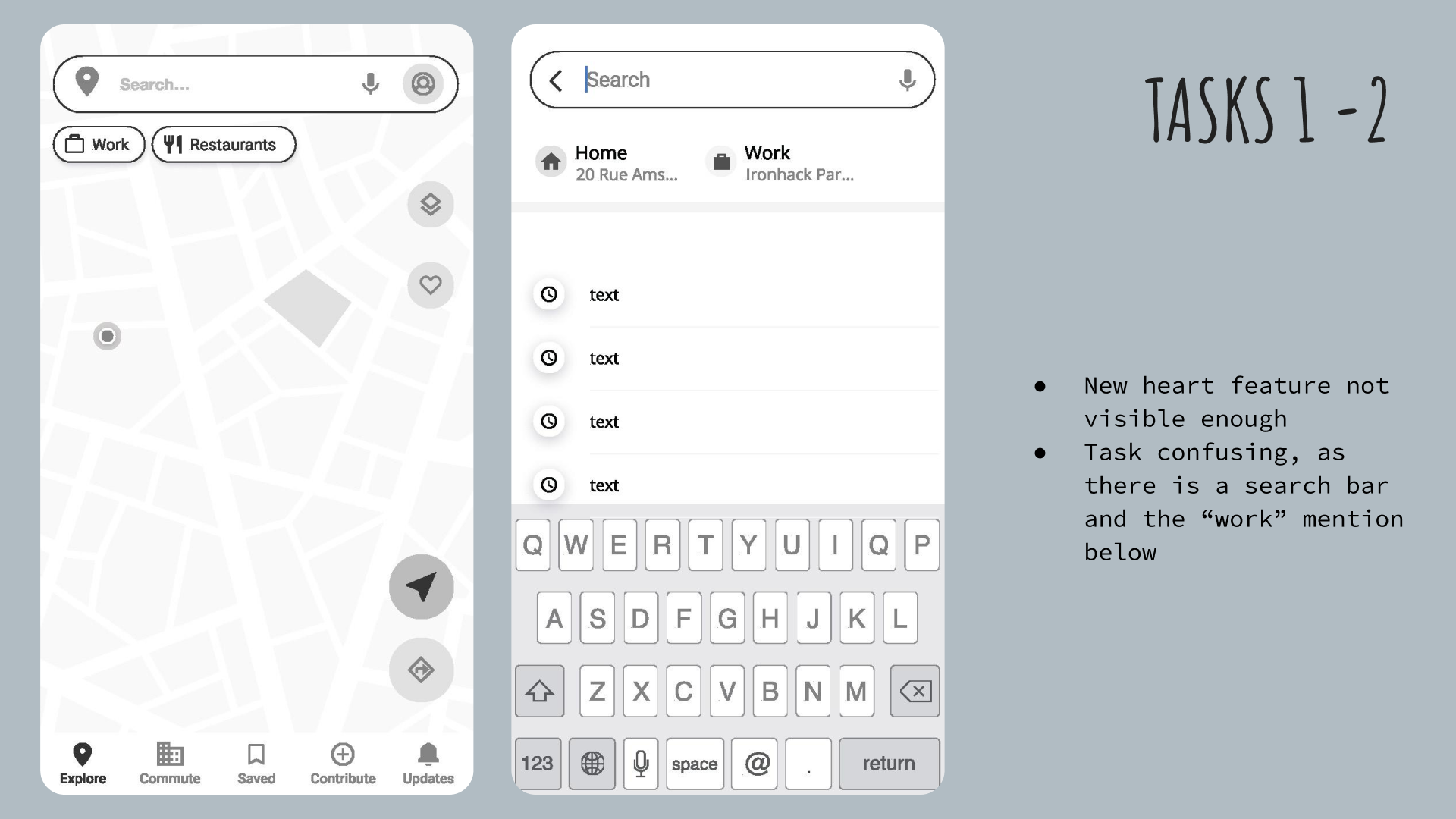 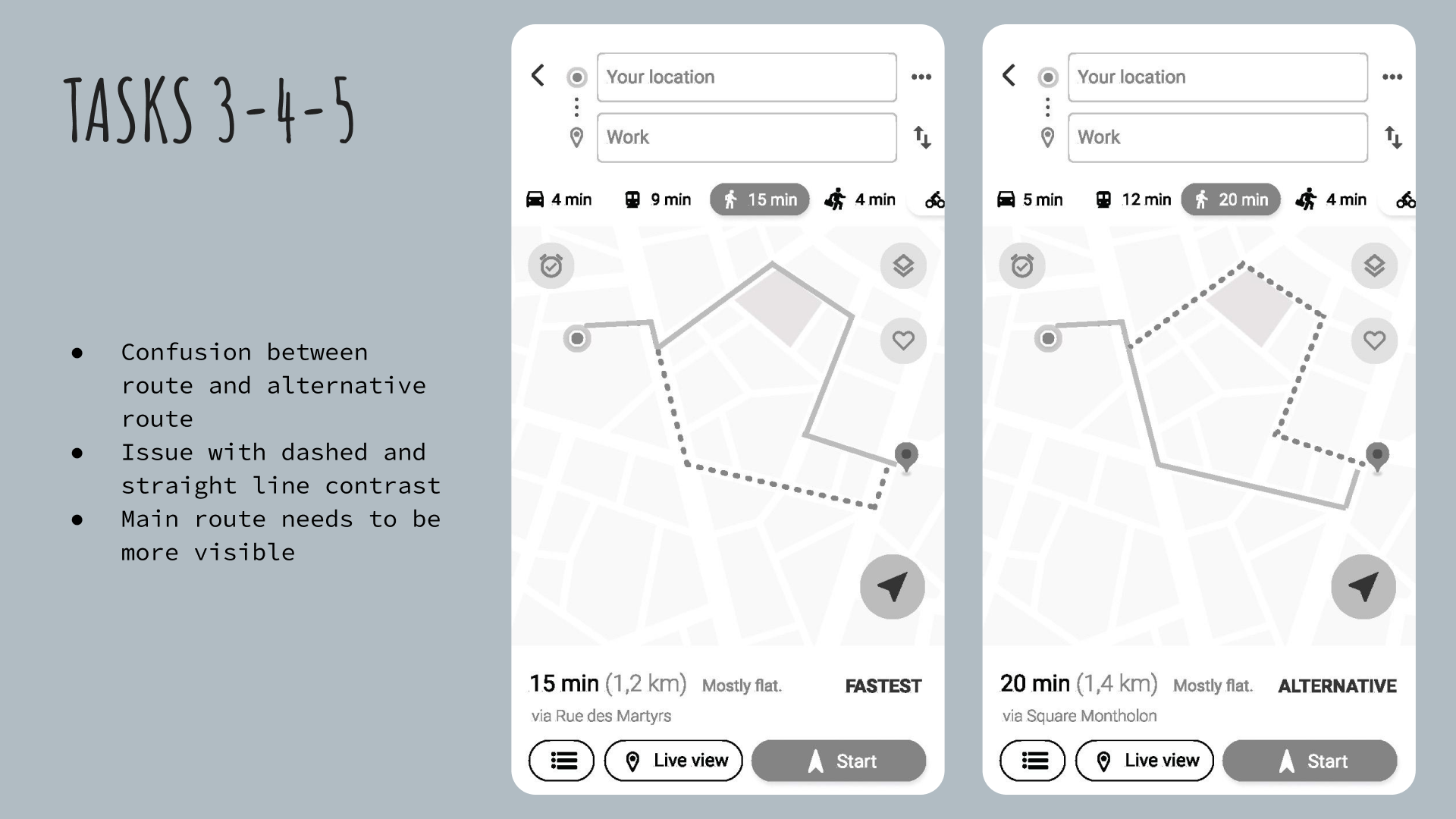 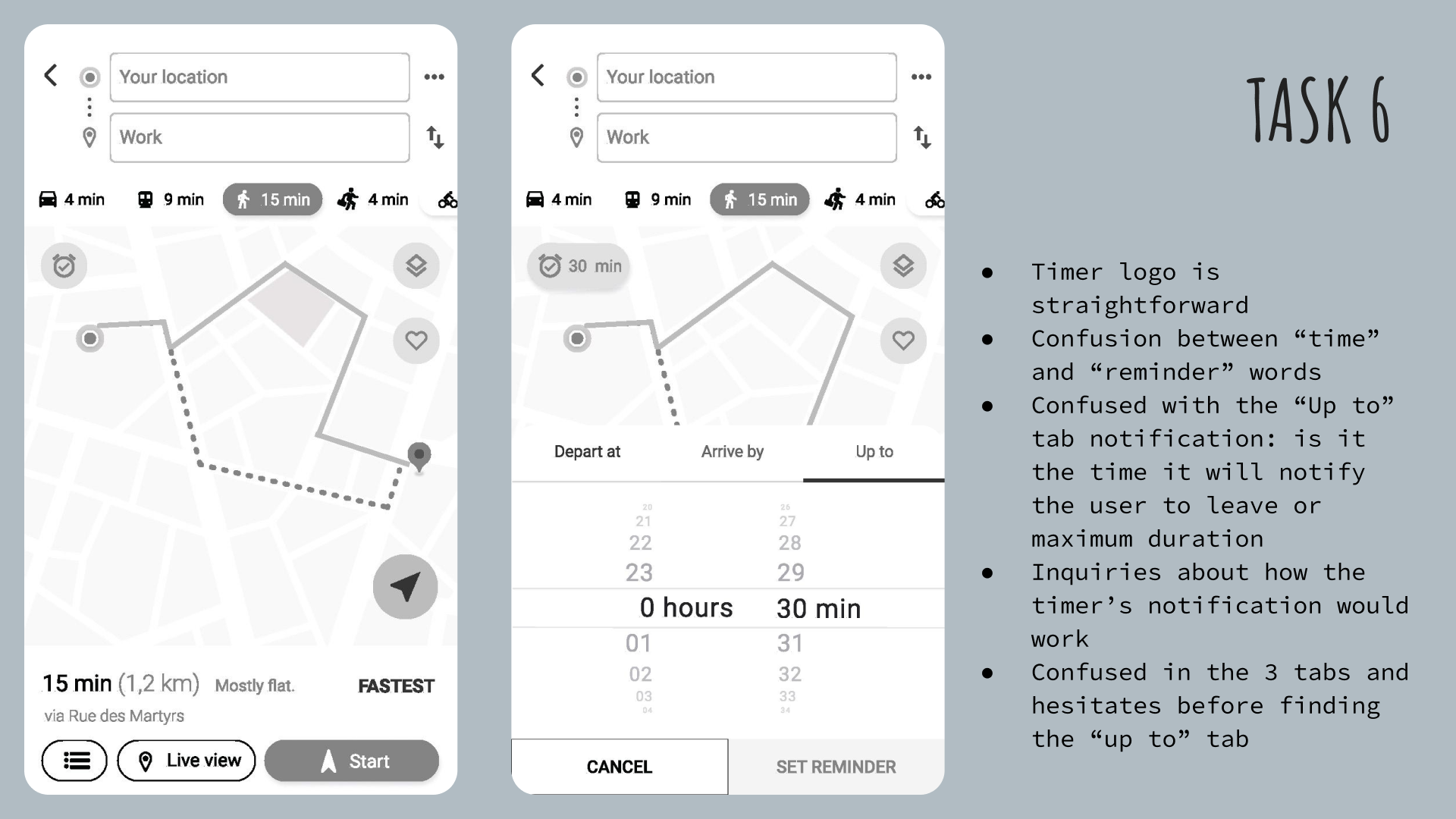 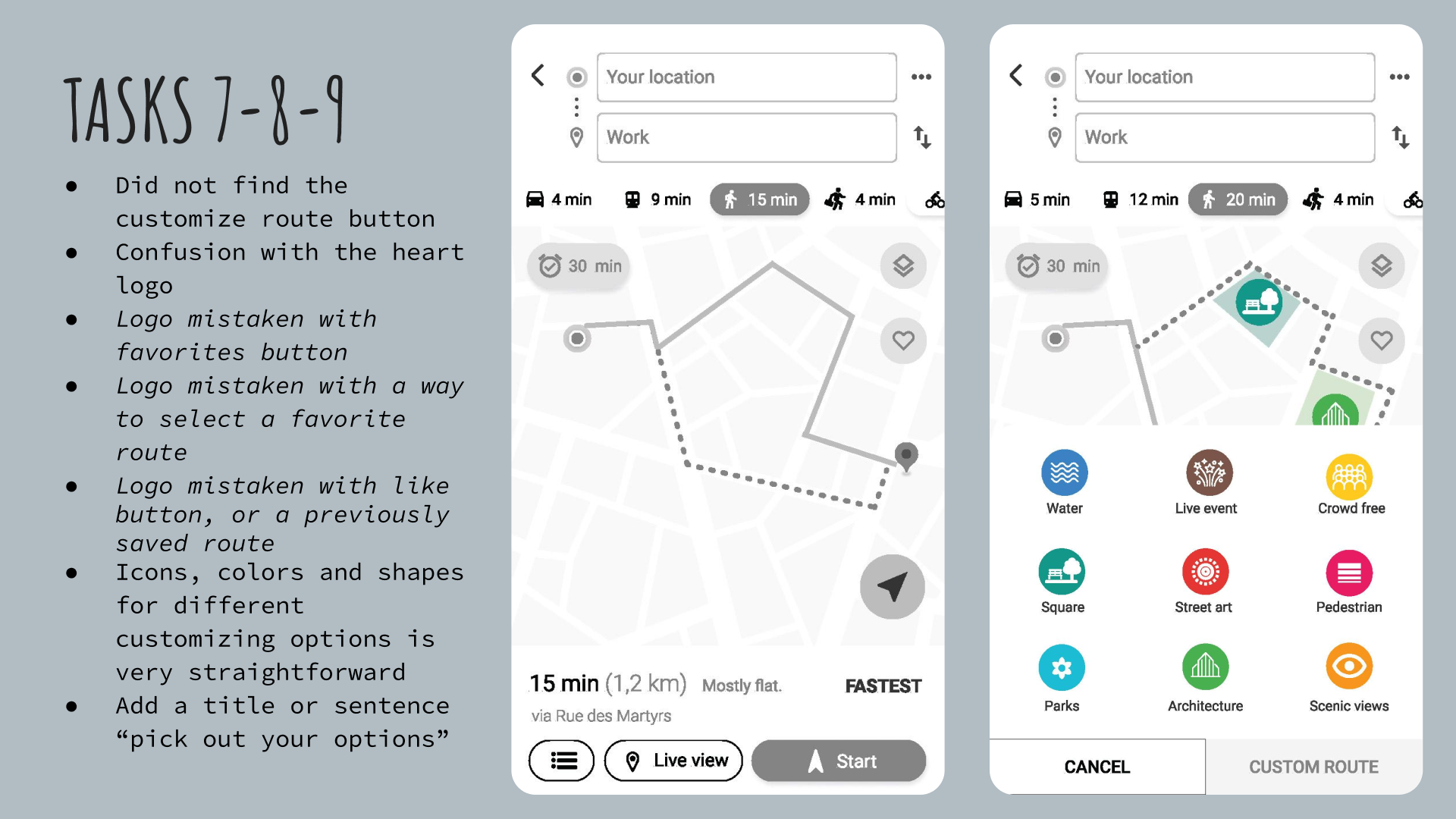 "We tend to fall into the same routine, and this will get me out of my comfort walking zone !"